My personal experience with Labiaplasty surgery!

“For the first time in my life I feel feminine when I look in the mirror at my naked body!”
I believe every woman deserves to love themselves and feel beautiful inside and out, and to make the most out of their life. Getting labiaplasty, happened to shift a cloud above me that has blocked the sun’s rays from me for too long, and for all the reasons I share with you, it has begun to impact my daily life for the better and I can now feel the warm sunlight igniting my spirit and my confidence. 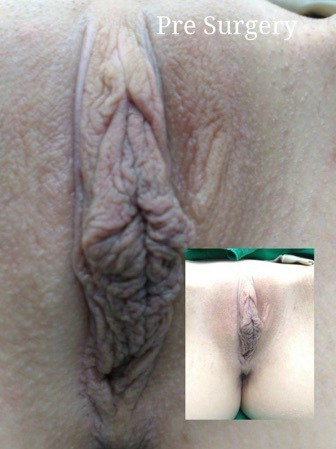 “I remember as I came into my teen years, noticing that I had more skin “down there” then I used to, I became very insecure about it. At 14, I approached my Mum about it, embarrassed and timid about even talking about it I recall her telling me it was completely normal for the inner lips to “hang out” a bit. I had my first boyfriend at 15, (he was a couple of years older than me) and I was with him for a year, 16 when I remember the fear that arose the first time he went for “second base”. My heart raced and I almost felt like crying because I thought I was gross down there and I was ashamed for anyone to see it.

I remember in grade 8 and 9, doing swimming classes, and feeling so awkward in the shared change rooms that I would go into a toilet just so I could change without being seen. All I wanted to do was to be able to shower without care and chat to my girlfriend who was sleeping over, be able to join my friends skinny dipping out in nature while camping and feel the freedom they did, and most of all, to be able to feel attractive and sexy to my partner and in my own skin.

I would constantly worry at the gym in my leggings, that it would be noticeable, that maybe I had a little bigger bulge down there. Rock-climbing and abseiling and anything with a harness also became a nightmare for me, fearing it might be “sticking out” for the world to see. Just trying to rock underwear confidently was hard enough, let alone trying to imagine myself wearing any see-through style intimates for my partner.” “I had our trip to Bangkok organised, along with the labiaplasty surgery with Dr Thiti at the World Medical Centre. Fast forward to the day of the surgery, the 17th of May. I walked into the hospital, filled in some paper work and we followed a nurse up to the cosmetic surgery section. I was really nervous and terrified at the thought of letting someone see, and when Dr Thiti sat down with me, it felt like only a second passed after the few questions asked, before I had the curtain pulled around me and I was assisted by a nurse to take my shoes, pants and underwear off. I felt so vulnerable as I lay on the bed, and it only got worse when he handed me a little mirror to hold and there I was, staring straight at it, what I’d tried to not look at for so long.

I was instructed to lay on the bed on wheels, and was pushed into a preparation area to wait until I went in. The nurses began preparing me, lifting each leg onto the two stands that would hold me in the child birth position.

A nurse held my hand and comforted me, as I kept saying through tears “I’m scared.” About just over half way through I began to get tired, probably the adrenalin wearing off slowly, and I began to calm down. I remember shutting my eyes and zoning out every now and then before I knew it, Dr Thiti said he was finished.” “I took my first photo down there, and I was blown away with how I looked, I couldn’t believe my eyes. For the first time since I was a child, I had the outer lips touching again and the clit hood was tiny instead of taking up all the space. I was so excited, and sent a photo to my best friend who was the only other one who knew about my surgery. It was so strange, that only hours ago I didn’t even want my eyes to look at it, and now I was confidently showing my girlfriend.

From that moment on, I had no fear of him seeing, or anyone seeing actually, even with the swelling, it looked exactly how I wanted it to, and I loved it. That night, I woke up several times and needed to be pushed in the wheel chair to the toilet and back again, and he was so mature and caring about it.

The first day post op, I stopped using the chair to go to the toilet, and hobbled my way there like a cowboy, or as my partner called me, a penguin. It was a slow journey, but I’d get there and back, and was happy that I didn’t have to wake him all throughout the night. After every trip to the toilet, I’d put the towel onto the bed and gently run a little water from a bottle onto it to keep it clean, then put the ointment on the stitches to prevent infection.

For the first time in my life I feel feminine when I look in the mirror at my naked body. I am by no means saying that you have to look a certain way down there to be feminine, not at all, I think all women should feel empowered in their bodies. For me though, removing some excess skin allowed me to tap into the feeling of empowerment and made me feel more who I am on the inside, on the outside. The effect it has already begun to had on me, is truly priceless.”

“I am posting these images, despite any embarrassment, because I know I would have been so grateful to have known what I was in for before my own surgery, had someone else done so. This is my way of giving out a little confidence, for the confidence I have been given. I hope seeing this blog will help at least one woman out there, to feel comfortable in making the right decision for themselves and feel safe in doing so.”